Besides the strange math, let us consider the other claims laid out in this flyer.

Only 4% of Autism Speaks’s budget goes towards the “Family Service” grants that are the organization’s means of funding services.

On the surface the sentiment is correct. Very little of the budget (5.34%, not the 4% stated) goes towards grants in Autism Speaks’s Awareness, Family Services, Advocacy program. It seems that their definition of “helping autistic people and families” only includes money that is directly going to other organisations or people.

Let’s go with that for the moment and take a look at ASAN’s 2016 form 990. They gave $39,090 in grants while having a total budget of $738,688 that year. Going by their own definition, only 5.29% of their budget went towards “helping autistic people and families”. This amount is smaller than Autism Speaks’s 5.34%. Talk about pot calling the kettle black!

ON THE FEDERAL LEVEL, AUTISM SPEAKS WORKED CLOSELY WITH GRASSROOTS ADVOCATES AND CHAMPIONS IN CONGRESS TO INCLUDE PROVISIONS IN THE LANDMARK 21ST CENTURY CURES ACT THAT WOULD POTENTIALLY ACCELERATE BIOMEDICAL INNOVATIONS FOR PEOPLE WITH AUTISM AND IMPROVE PATIENT INPUT IN THE DRUG APPROVAL PROCESS.

The expenses and salaries of these advocates, isn’t it “helping autistic people and families”?

And what about research expenses? In 2016, Autism Speaks funded research into Central Audio Processing Disorder and Oxytocin as a treatment option among other things. Isn’t this “helping autistic people and families” as well?

According to Linkedin, ASAN has 21 employees while Autism Speaks has 569. As a smaller and leaner organisation, it is definitely possible that ASAN doesn’t need their director/s to spend as much time on management compared to a huge organisation like Autism Speaks. But I don’t know what the job responsibilities of an executive director are in ASAN. I can only calculate the worst case scenario of all compensation to the executive director/s being misreported under program expenses and present a range of values. With that in mind: In 2016, ASAN spent between 70.5% - 88.8% of their budget on program expenses. In the worst case scenario this is lower than Autism Speaks. In the best case scenario, this is impressive but understandable given the lower management overhead of a smaller organisation.

Which brings us to the next point:

its rates of executive pay are the highest in the autism world: some salaries exceed $430,000 a year.

On the surface this is literally true. Angela Geiger, the president of Autism Speaks was paid $439,025 in 2016. But this fails to take into account that Autism Speaks is also the largest autism charity in the world and that CEO pay goes hand in hand with the size of the charity. According to Charity Navigator’s CEO study 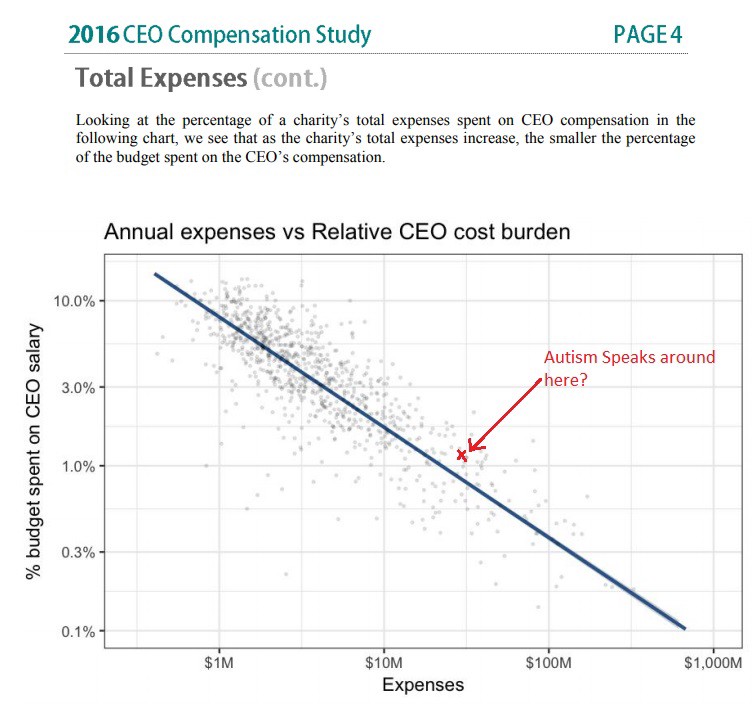 As you can see from the graph above, Autism Speaks’s CEO pay is par for the course.

The second point the flyer makes is that:

Autism Speaks talks about us without us.

However the next line is:

Autism Speaks has only 2 autistic people out of a total of 26 individuals on its Board of Directors.

Call me autistic again but doesn’t “without” literally mean none or lacking? 2 is not none. 2 out of 26 is 1:13 which, compared to CDC’s 1:59, is 4.5 times more neurodiverse than the general population. How much neurodiversity does it take for it to be enough? 1:5? 1:2? 1:1? And when it is 1:1, isn’t that not neurodiverse anymore? Neurodiversity is the diversity of human brains and minds, the infinite variation in neurocognitive functioning within our species. To me, that sounds like it includes neurotypical people as well.

The final point the flyer makes is that:

Exactly how are these videos promoting fear, stigma and prejudice against autistic people?

The flyer also faults Autism Speaks for spending too much on fundraising. It is important to understand that fundraising expenses aren’t necessarily a bad thing. In 2016, Autism Speaks spent $9,981,115 to raise $47,544,741, which means that they spent about $0.21 to raise $1.00. If they had spent less on fundraising, they probably would have had less to spend on their program expenses.

In 2016, ASAN spent $15,036 to raise $374,845, which is a fundraising efficiency of $0.04. That’s impressive! If they had spent more on fundraising, who knows how much more money they could have had to spend on their program expenses? But if their fundraising strategy consists of publishing this kind of crap so that they can undermine the efforts of another charity organisation, shame on them!

« Something strange about ASAN’s flyer about Autism Speaks The Twitterverse: The Autocannibalistic Entity »